The “Take Back the Night” campaign to end sexual assault and abuse has the best intentions. But it is problematic because it perpetuates the idea that women’s sexual assault and abuse follows the dark night, man-behind-the bushes-with-a-knife narrative. In reality, the “night” is a constructed demon. All too often abusers closely mimic the warmth and appearance of sunshine.

Traditional stereotypes for profiling bad guys completely fail us when it comes to identifying abusers. Abusers come in all shapes and sizes, and oftentimes they capitalize on their normal appearance and normative success in order to persuade us of their goodness. The “Take Back the Night” campaign is a symbolic reduction—an oversimplification—of the experience of assault and abuse. It implies that women are assaulted suddenly by a stranger when they are alone at night.  In reality assault and abuse can be short to long term projects where the predator chips away at the victim’s protective walls. According to Statistics Canada, 80% of sexual assault survivors knew their abusers (Statistics Canada 2003). Assault and abuse are usually psychological as well as physical projects, leaving the victim distressed with complicated grief.

So it isn’t a particular profile or scene we need to avoid in order to protect ourselves. Instead, it is a particular pattern within our existing relationships that we need to look for: a pattern of power asymmetry. Sexual assault and abuse is a function of unequal pattern relations; it happens when the abuser establishes dominance over you. We need to work on strengthening our discriminatory power until we become pros at identifying the problematic power structures that constitute assault or abuse. The fact is that women are not educated enough about their rights. Certainly, we are familiar with and celebrate the equality we are entitled to in politics and law, but many of us forget that we are entitled to the same equality in the relationships that comprise our everyday lives.

Inequality in romantic relationships has become so normalized in our culture that we now romanticize the idea of the man that yields power over us. The popular Twilight Saga by Stephenie Meyer portrays power asymmetry as an enviable relationship dynamic. Bella’s obsession with Edward shows that he yields enormous power over her, and his paternalistic babysitting is patronizing. The idealization of an unequal power relationship sends a negative message to women. Women today should be taught that a healthy relationship should leave them feeling empowered, not disempowered.

In preparation for the traditional rape narrative we have rape whistles. But there is no simple tool for blowing the whistle on everyday toxic relationships. We want to ask you if you have any ideas on how we can help facilitate a better understanding of the importance of power symmetry in relationships. You can suggest a conceptual theory, a slogan, or even a symbolic artefact.

According to Disability Theory by Tobin Siebers: “Disability marks the last frontier of unquestioned inferiority because the preference for able-bodiedness makes it extremely difficult to embrace disabled people and to recognize their unnecessary and violent exclusion from society.” As a University and as a student society, we should work to ensure that this discrimination is eradicated by ensuring that we include people with disabilities. Indeed, disability is often described as the “product of a disabling social and built environment” (Tobin). Disability is indeed an important part of the human condition.

Our club has a number of students with what many refer to as ‘invisible’ disabilities involved and we believe that it is important to create a safe and supportive environment where people with disabilities can participate and contribute to our work.

Next year, we will also be working with DAWN Canada to put out an issue of Antigone Magazine on Women with Disabilities. Having women with disabilities involved in our organization has greatly impacted how we operate and what issues we see as important. We believe that the AMS will also see these benefits.

I am Megan, a brand new face to Antigone, but excited to be starting up a new column here focusing on the female political leaders. Political Mavens will be talking to the women who are hard working within government to get something done about feminist issues, among many other things. 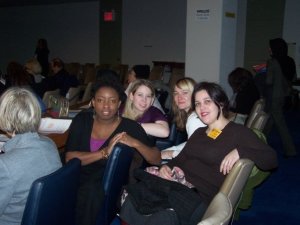 Mira Hall (Yellowknife, NT – pictured RIGHT) is studying political economics and pursuing a career in policy development relating to food security and affordable housing.  Mira is employed at the Centre for Northern Families where she provides a range of family support and community outreach services. Mira was once roommates with Antigone Magazine Editor Amanda Reaume when they were both delegates to the UN’s Commission on the Status of Women. This past fall, Mira ran for School Trustee in Yellowknife District 1 and won!

1. How and why did you get involved in politics?

I have always been politically active. My mother is an activist and she always encouraged me to be involved in the work that she was doing, or work that she saw others doing that she supported. I think that I was reluctant for a long time out of rebelliousness. At the end of the day I really care about community, about reducing marginalization, and I’m too passionate to stay away from politics.

2. Why do you think women should get involved in politics?

I think that women are the best qualified to represent women’s perspectives in government. For too long we have trusted that our male counterparts could represent our interests when they shape the policy that shapes our lives, but they haven’t been women so they couldn’t possibly have as deep an understanding of what our interests are as we do.

This was illustrated to me vividly during a forum during the last territorial election. Candidates were asked why they thought women weren’t participating in trades and non-traditional employment and how they as MLAs would encourage women’s economic participation in the lucrative employment opportunities provided by mining, oil and gas. The only candidate who pointed out that mothers aren’t often able to find childcare for the full two weeks that a standard camp rotation would be and that many mothers be unwilling to leave their children for two weeks out of every month was a mother of three.

3. What issue do you see as particularly important for women?

I think women’s economic independence is the number one issue for me, and that many other issues that women face are a direct result of their economic dependence. There is a persistent wage gap between men and women in Canada, and women are still structurally excluded from some types of employment.

The other issues that rank highly for me are violence against women, child apprehension, and the feminization of poverty.

4. Have you ever experienced any discrimination as a woman in politics? If so, describe your experiences and how you handled them.

Any discrimination that I notice is pretty subversive, and is rarely directed right at me in my presence. Although I notice that it seems to be women who are hardest on me and on other female candidates. I hear women calling female candidates things like “bitch,” “crazy,” “slut” and “shit-disturber,” generally when I hear the comments about male politicians and candidates the worst is “crazy” or “useless.” It makes me sad that women aren’t more supportive of each other.

It reminds me (as someone who is not affiliated to any party) of how leftists cling to the idea that Conservatives are “anti-woman” but in Canada they can claim the first female Prime Minister, and in the US they ran Sarah Palin. Leftist women are the first to say “well, they don’t really count” for whatever reason, and yet the “pro-woman” parties don’t even give us women “who don’t count.” They just keep feeding us “pro-woman” men. I’m really hoping that there is drastic change coming and that women step up and are supported by their parties and their communities.

5. What issues are you passionate about?

I suspect that all of my passions can be boiled down to “reducing marginalization.” I think that every school should be reflective of all the populations that share our community. Every school should be inclusive for girls and boys, for people with varying “ability,” for a variety of ethnicities and socio-economic backgrounds, and for fluid identities within those demographics. And not only should our schools be reflective of our multifaceted society, but our neighborhoods too, and our workplaces!

6. What is your dream for women?

My dream is to live in a world where each person can be both proud of their own culture, identity, and place in society as well as be loving and accepting of those who are different.

7. What advice do you have for young women?

Keep your chin up and know that no one can represent you or your demographic better than you! Change the world, and keep pushing! 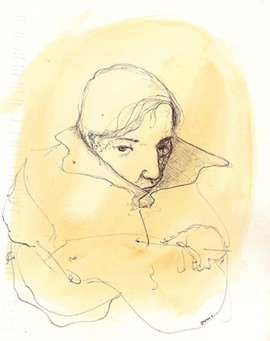 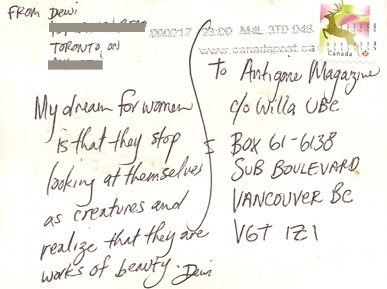 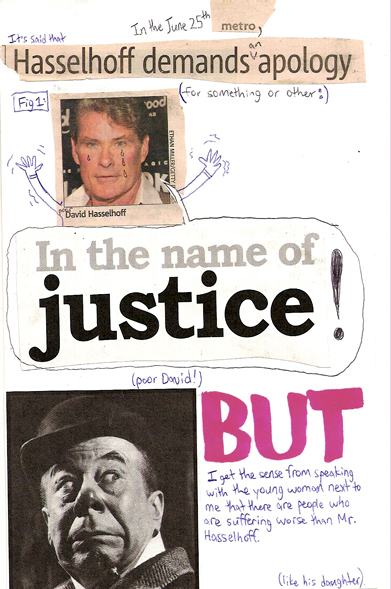 Do you have dreams for women?

Discuss in the comments below or see more postcards.